It’s been a long time – in more ways than one! The Invincible Army sectorial is finally available on INFINITY Army, with a host of new profiles and troopers, and a brand new starter on the way. Seems like the right time to get back in the saddle (I apologize to anyone who has been hanging out for updates in the last year).

So what am I excited for?

The number one item is Zuyong fireteams, so this post is going to focus on them, the core of the Invincible Army. Whilst I had always fantasized about having a reason to use a lot of them, I never expected that they would receive the benefits of as many new skills as they did. Most of these boons target the generation and use of orders. Tactical Awareness is a major game changer on its own (an extra order with no restrictions when used in a fireteam), but it also happens to be on two of the more useful profiles. The HMG is who you would be spending orders on anyway, given his BS16 B5 bullet hose. The Tactical awareness Tinbot haris profile might not be spending orders mowing jerks down like the HMG will, but she can use the order to move the link when you are secure enough to do a move-move order. Just watch out for that hidden deployment, especially in factions that have access to hidden missiles! 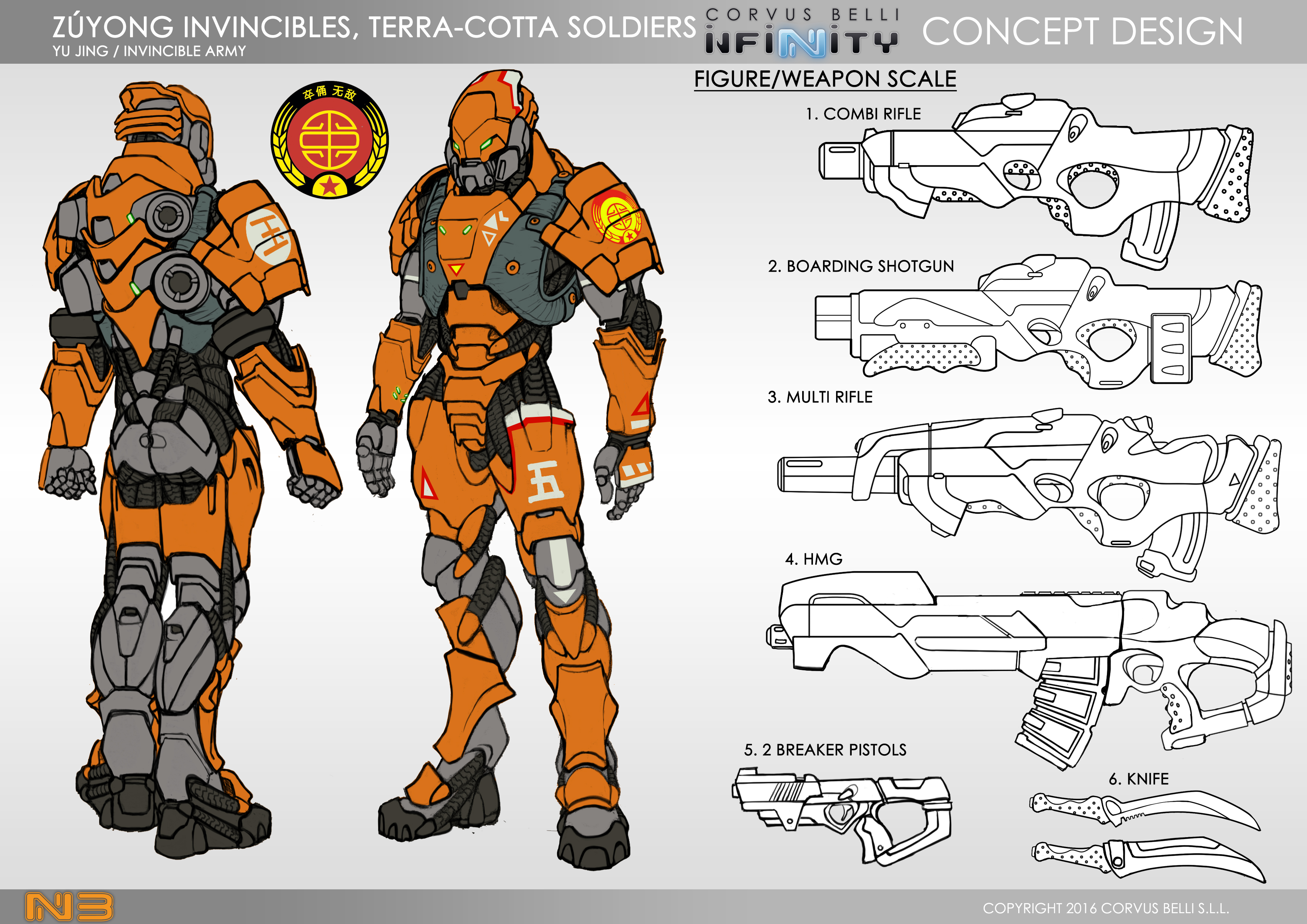 Invincible Army players are also able to sub out one member of the link several different cheap and/or useful wildcards. The new FTO profile for the Yaopu will be doing a lot of this, although there is also merit for using various Haidao in this way. 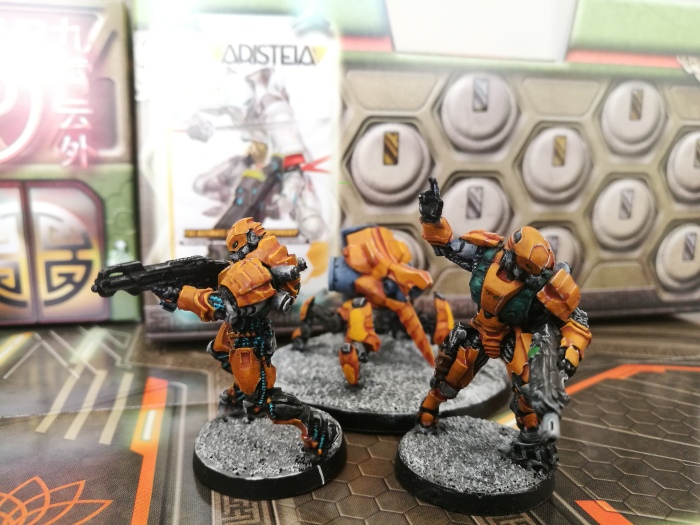 All this aside, the real shock and awe begins with Tai Sheng, the thus far unseen Zuyong hero. He is so incredibly good that I actually feel a bit guilty. Aside from being a total beast statwise, a specialist and packing a truck of a gun (I’d only ever use the Mk12 profile), the ability to spend the two Lieutenant orders generated by a Daoying on Tai Sheng, without breaking his fireteam is pure insanity.

Pop this code into INFINITY Army to see how it might look: EwBgLAPgzCIRwCkBGYYyLANlYghMgKwrBYZgDsyW+xqhImWhUtJDThGedwH2YJD3aMB3YK1QUklKEgACioA=

Just in this unfinished list there is the potential to spend 12 orders on the link, so long as 1 goes to the Haris/Tinbot, 1 goes to the HMG and 2 go to Tai Sheng. This could easily be 14 orders once the list is finished. The reasoning behind these particular profiles is that if going first, the missile launcher can nuke hard targets, relying on his second wound and high stats to see him through, and if going second, BS16, B2 Missile AROs with Sixth Sense is comfy enough defense to go second with. In both scenarios, he’s likely to eat shit, which is why the Yaopu is there, making sure you still have the BS bonus when you reform the link and take revenge for him. The munchkin version of this list would probably trade the missile for a Haidao MSV2 Sniper, but I like Zuyong Invincibles and we are getting a missile launcher in the starter, so might as well put it to work. I’m really happy that by the time that the dust has settled, we will have 5 different Zuyong models, most of which will see a lot of play.

Zuyongs also gained the ability to have a pair of Yanhuo Invincibles form a Fireteam with the Haris profile (Check out my posts about the two Yanhuo Invincibles here). Anyone who is not completely irrational is going to swap one Yanhuo for a Yaopu FTO or Haidao KHD though. 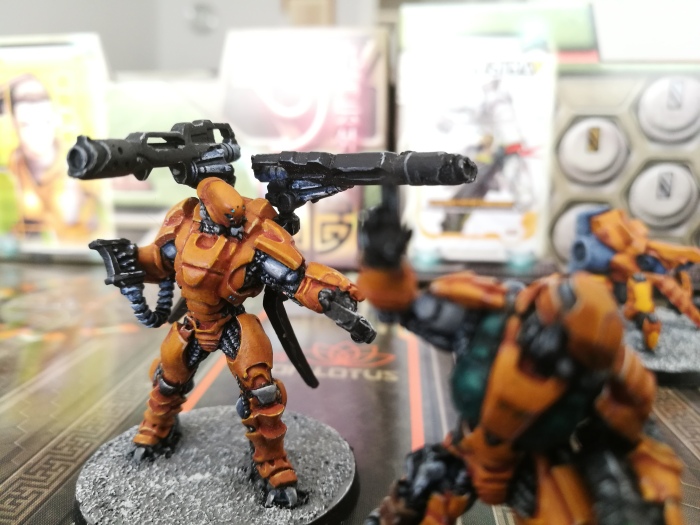 Such a fireteam is sure to turn heads, but whether it will be able to stand up to the serious tournament lists of something like VIRD, TAK or OSS is suspect. Gosh it looks cool though.

I’m also excited about finally being able to form a fireteam with Yu Jing’s most basic trooper, the Zhanshi. I think I will cover them in another post, as I intend to pick up the SWC box and I have two conversions that I’d like to show off. As this ended up being a post about Zuyong fireteams more than anything, be sure to check out one of my favorite posts on one of my favorite models if you haven’t already.

One last thing, a quick shout out to my first Invincibles, who I would not be here without. These are my “waiting a long time for Invincible Army” cred. 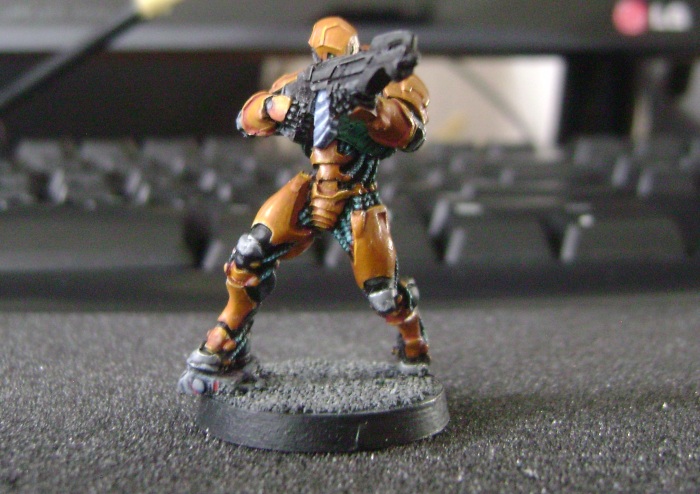 This post was long overdue. After all, this page would not have been here if not for this guy. The Zúyŏng Invincible pictured above has the distinction of being the first model I painted in the orange. Subsequent satisfaction with the result set about a whole sequence of chain reactions. I bought Sun Tze to paint him the same, which eventually lead to me buying up most of the Imperial Service to keep him company. I repainted all my stuff to make it match him. I also created this guide at the behest of /tg/ and built a blog around it, that now even has a couple of followers. Funny what an unexpectedly decent paintjob can do for your confidence.

Now, lets take a look at the naming and iconography of this unit.

The full unit name is given as Zúyŏng Invincibles, Terracotta Soldiers. If you really squint, you can see that their logo reads 卒俑 无敌, that is, “Zú yǒng wú dí“ in pinyin.

So, if you guessed that “Zúyǒng” meant Terracotta Soldier, close but not quite. The second character, that is 俑/yǒng, refers to funerary statues. For example, within China, the famous Terracotta Army, charged with protecting Qin Shi Huang, the first emperor of China in the afterlife, is simply referred to as “兵马俑/Bīng mǎ yǒng“, made up of the character for soldier, the character for horse, and then yǒng. To pronounce 俑/yǒng, it’s just like “bong”, with a ‘y’ instead of a ‘b’.

So does 卒/Zú stand for terracotta? No it does not. 卒/Zú denotes low ranking soldiers, grunts, and has connotations of servitude. So all together 卒俑/Zúyŏng denotes a tomb figure in this role. To pronounce, 卒/Zú, use the same sound we used for “Sù” in Sù-Jiàn, but instead kicking it off with a plain old western ‘Z’ sound. Start with the word “tool”, take away the ‘l’, then turn the ‘t’ into an ‘z’.

Onto the second part of the name, 无敌/wúdí, which process of elimination pretty much guarantees will mean invincible. Well it does, in a manner worth exploring. 无/wú means none or without, and often works as a prefix. For example, put 无 in front of the character for heart and you’ve got heartless and so on. It rhymes with the Sù-Jiàn “su” and the   Zúyǒng “zu”, but this time starts with a ‘W’. What is a Zúyǒng “without” you might ask? 敌/dí means enemy or opposition. Together the characters in 无敌/wúdí, (which sounds almost exactly like woody) could be translated as “matchless”, “peerless”, “unrivalled” and the like; Basically lacking the qualities that make someone vincible.

Interestingly, 无敌/wúdí does not feature at all in the name for the Invincible Army to which the Zúyǒng Invincible belongs. That formation is, according to the rulebook, called the 常勝軍/cháng shèng jūn, sharing it’s Chinese name and a little backstory with the Ever Victorious Army of antiquity.

Now when it comes to painting, I’m no Angel.

That said, I am pretty happy with the Yu Jing style orange I have achieved by aping his colour selection, so I will share it with you today because it is really very easy to pull off, using only a normal paintbrush and 5 colours. I was in the process of painting Sun Tze when I was first asked to make this demo, so his arm was already done. The instructions correspond to what is going on on his backpack unit.

The model was primed using Games Workshop Chaos Black spray. A complete coat of Orange Brown from the Vallejo model range was painted over the armour panels.

I diluted some Vallejo Cavalry Brown and wash the orange parts. I try to get it thin enough that the most extreme bits don’t really change colour. I put it on thicker that day because I did not want it to run wild, so after that I picked out the highest bits again with the Orange Brown

Next, I picked out the   extreme edges with white. I used a GW Skull White of questionable age.

I took some Scrofulous Brown from the Vallejo game range (my current favourite paint of all time), and thinned it a little with water. Then, starting from the white edges, I drew it towards the darkest areas of the surface.

And that’s all there is to it! 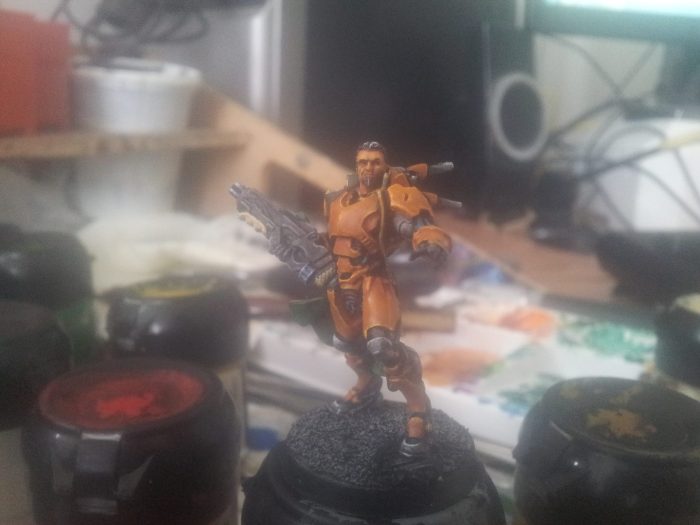 I started collecting Infinity before I started this blog. I’m hoping to go back over my early experiences in time, my old paint jobs and so on to make this blog a complete account of my experience collecting Yu Jing for Infinity. I will do this at the same time as I add posts about what has been going with my battlegroup recently.