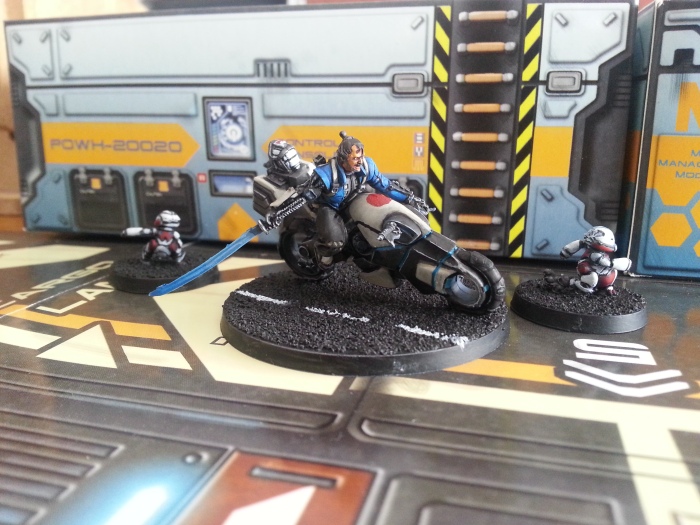 Gaijin see him rollin’, they hating.

And rightfully so, Yojimbo is both extremely dangerous and in-your-face Japanese. He takes some of the key strengths of the Japanese Sectorial Army line up, that is, blindingly fast bikes and close combat blenders, and jams them into one 21 point profile with Crazykoalas to boot. Throw in smoke and No Wound Incapacitation and it seems too good to be true. He is however very vulnerable to bullets.

He was also quite comfortable to paint. I painted the mounted version fully assembled, which is always a huge plus to morale. I had to really jam the brush in here and there to get underneath the seat but other than that I found nothing inaccessible. The standing version also has a nice open pose that is very conducive to painting. I can’t say I painted him in one piece, although I tried to. In the poor light of my flat, I ended up dropping him not once but four times during the process of painting, each time taking a bit with him. Luckily he made a full recovery, thanks to a pair of ratcheted surgical forceps my brother gave me, which I used to straighten the pretzel formerly known as his scabbard.

The colours were really very simple, yet I am very happy with the effect. I started by priming the whole models with Army Painter Uniform Grey from a painfully expensive spray can. Then I painted the metallic areas, namely the servo muscles of his sword arm, the magazine of his contender, the engine and wheel hubs of the bike and the elbow pad and bracer of his right arm with Citadel Shadow Grey. I then applied heavy washes to the whole models with dilute Abbadon Black. Then, the jacket was painted with Enchanted Blue. Once the Jacket was dry, I mixed a wash out of Regal Blue, Abbadon Black and water, and painted the whole jacket with it. After that dried, I mixed Enchanted Blue with Ceramite white and painted most areas of the jacket that did not hold any of the wash. The tan areas, namely parts of the bike, belts and straps, left arm bracer and some detail on his Yojimbo’s shirt and boots, started as Vallejo WWII German Camouflage Beige, which is a very nice colour. I then sparingly added Deck Tan. Skin was painted with Bronze Fleshtone, then washed with dilute Cavalry Brown, then highlighted with the Bronze Fleshtone again. I got brave and painted the scalera of the mounted version, but failed in all attempts to give him pupils, so now he looks like someone out of Street Fighter. Can’t remember what reds I used for the rising suns, but I am sure Citadel Blood Red featured at some point.

Funny story, Yojimbo is actually one of the only models I ever proxied (not that proxying is funny). He took out infiltrator Thrasymedes, my most hated of all the Homerotics, and that was enough to make me watch the movie and buy the figure. 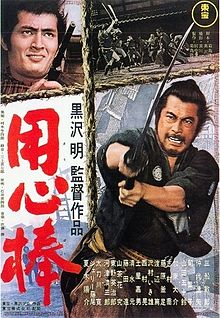