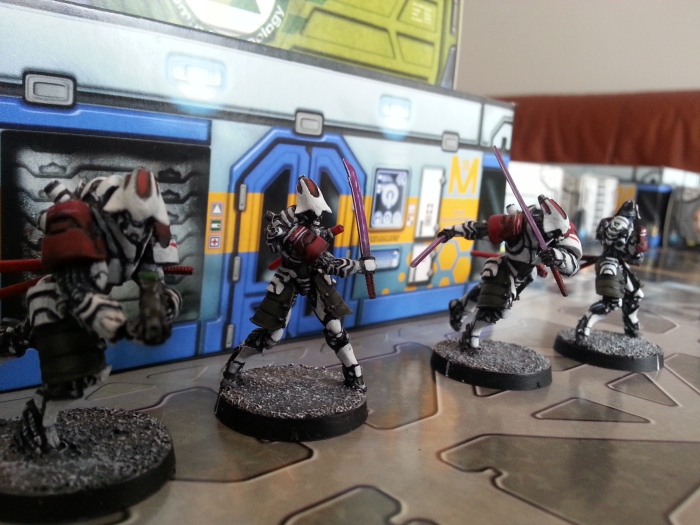 For a society that thought disemboweling yourself was beautiful, disemboweling your enemies must have been the bee’s knees. That’s what these guys do. They mulch things, aesthetically. They are so committed to beautiful death that they are willing to sacrifice their lives to get that perfect hit in, although with 2 wounds and ARM 3, often all that is sacrificed is your opponents sense of agency. An unopposed normal roll on 32 is about as sure as anything gets in Infinity. I’m unaware of any of any other stats being pushed higher by any other unit.

The number of units in the game who feel like base contact with a Dō-maru is a good place to be can comfortably be counted on one hand. Even close combat monsters that are double or triple the cost like Seraphs and Achilles, who are likely but not guaranteed to turn the brave mecha samurai into scattered mince in retaliation, will more often than not find themselves immobilised  when the bits settle. That is of course, if the Dō-maru opts to take them on head-first, which may not be necessary when you can speculatively peg E/M grenades at PH 14.

In short, I love Dō-maru. I’ve used at least one every game I’ve played as JSA since the first one I bought was painted. I’ve used two in every game since HSN3 dropped. I think duo is obscenely good value on someone who has no real ranged combat ability and therefore often has to take the long way around to the enemy to avoid getting shot. There’s no downside to breaking a duo once you are arrive at your destination, so the extra order of the 0 SWC lieutenant option gives that extra boost which permits it to dive into the enemy ranks and go to work. When he finally does run out of steam, the second one is right around the corner. 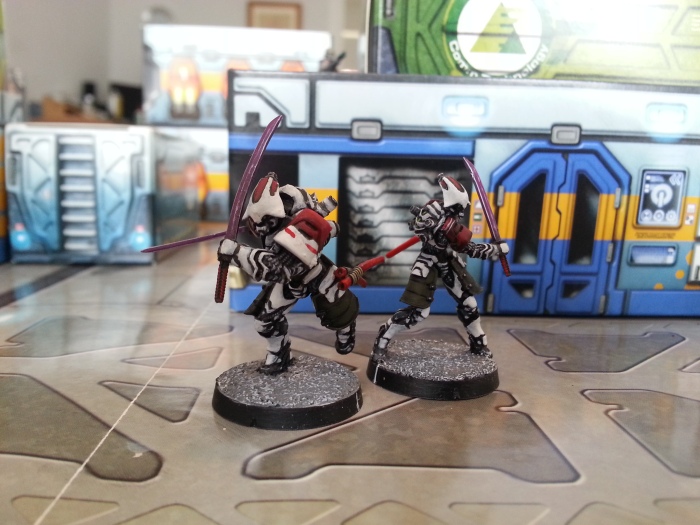 As for the other profiles, there is one which trades the E/M CCW for a DA CCW. This one has the advantage when you want to prioritize lethal damage. When the E/M CCW crits, the enemy still gets to make an ARM roll (against DAM 14), which could potentially be frustrating if slicing your way through chaff. In these situations however, I’ve found a solid critical karate chop is enough to send foes into blissful unconsciousness. I’d much rather the rare instance of having the enemy pass their save against DAM 12 by 1 or 2, than to have missed the opportunity to mission kill a TAG in one hit. There are also some profiles with various more expensive ranged weapons. I’ve yet to use one. Maybe I will in a core link however I’ve yet to explore core links with these guys. When I do go down that road, you can bet that it will be a Haramaki link with Dō-maru thrown in, to take every weakness of the unit and replace them with disgustingly optimised ranged strength.

I was extremely lazy painting these guys. I primed them with army painter Uniform Grey, like most of my JSA. I then painted their calf plates and servo muscles with GW Shadow Grey. I painted the abdominal and thigh guards, I think they are called Kusazuri and Haidate in Japanese, using GW Castellan Green. Then I gave the whole thing a fairly heavy wash with diluted GW Abaddon Black. Once that dried, I went back and hit the raised area of the abdominal and thigh guards with Castellan Green. I then mixed some GW Bubonic Brown into the Castellan Green and picked out the edges. This is barely visible at the moment so I might go back and do it again. Mine are noticeably flatter and darker than the studio’s. I then painted on the red panels of the shoulder pads (Sode) with GW Scab Red, which was then blacklined with the same wash, and highlighted with Scab Red mixed with GW Bleached Bone. Once that was all dry (and I mean really dry, nothing says impatient like a bright red finger print on white armour), I edge highlighted all the bits that I originally did in Shadow Grey with GW Ceramite White. I then painted the armour panels with the same colour. No layering, blending, mixing or anything. I just threw white at it, lazy as anything, but keeping out of the grooves. I tried to leave a fade to the original grey but it didn’t really happen. 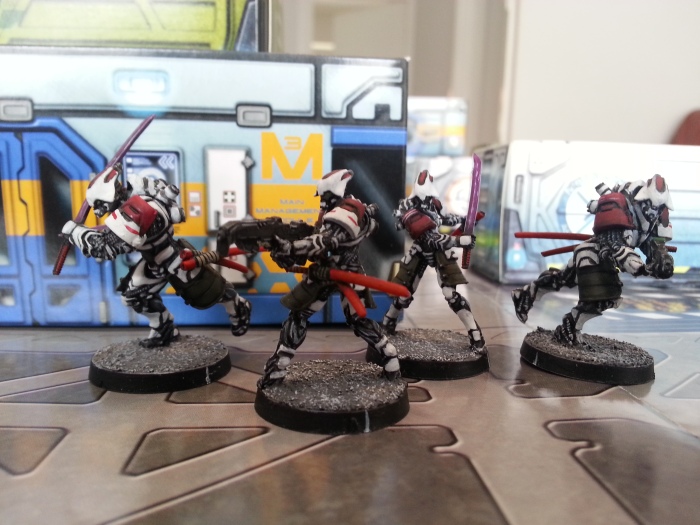 The scabbards were done with GW Blood Red, with Vallejo WW2 Ger. Cam. Beige banding. Note that my friend Dragonstriker from the forums fixed me up with the paired swords from an older Dō-maru to put on the Spitfire model, who ships without swords.

The electro Katanas were done by doing a hard edge highlight over the base-coat with white, before a few layers of watered down GW Liche Purple.